Nozomi Networks advisory points out that OpenWRT and many other Linksys, Netgear, and Axis, or Linux distributions such as Embedded Gentoo. But, as pointed out on the OpenWRT forum, “OpenWrt switched from using uClibc to musl by default already back in 2015, so no, unless you’re running a really, really old version or you’re using a custom build with uClibc.” Andrea Palanca (one of the co-authors) shared from another member of the OpenWRT project:

Confusing, which dictates that organizations need to ask for specific from their vendors. “Routers/CPEs” might be OK in a vendor but then their cameras, monitors, IoT, and ICS devices might be on a different branch.

What to remember with this advisory is focused on IoT and ICS systems. Nozomi Networks did the test, did find problems, and the investigations are leading to the discovery of potential software forks using obsolete code. Remember, the responsible disclosure flow had Nozomi Networks first approach the Industrial Control System Information Sharing and Analysis Center (ICS-ISAC) is an indicator of the feasible risk beyond Home Modem (CPEs) to a range of other devices connecting IoT and ICS devices.

DNS Cache Poison is a technique that has been used for decades. It is not very common but is used and often happens with threat-actors working to get long-term footholds in critical infrastructure (i.e .Nozomi Networks testing). Do you need a DNS “Cache Poison” Attach Refresher? Dr. Mike Pound’s eloquent video on DNS Cache Poisoning is a good refresher for anyone who is not clear at this point. 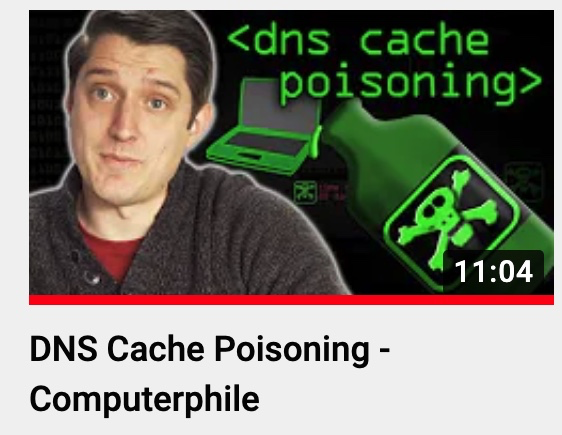 Who gets targeted with DNS Cache Poison Attacks?

Let us walk through an illustration (see graphic). A company “example.com” built an environmental IoT monitor that is deployed in organizations around the world. The threat actor would pick one of those organizations to target. Their goal is to get a man-in-the-middle attack set up to replace the firmware in the environmental IoT monitor. They know the IoT device has the vulnerability highlighted by Nozomi Networks & CERT/CC. They also know through observation the timing for the IoT devices’ “phone home” to see if there are new updates. Many times, these “phone home” updates happen at the same time. This allows the miscreant to have a window of exploitability to brute force the DNS Cache Poison.

If the poison is successful, the threat-actor would be able to replace a DNS record. Think of “softwareupdate.example.com” as the target for poisoning. The threat-actor changes the IP with their IP, allowing the IOT device to download their version of code.

How does Nozomi Networks Update the Risk?

DNS Cache Poison Detection – It is Noisy with Backscatter

DNS Cache Poison is noisy. Traditional DNS Cache Poison attacks need to “trigger” a lookup on the DNS Resolver (or proxy in this case). If the trigger succeeds, you then have a “race” flooding the device with packets trying to match the right port, DNS Transaction ID, and other fields. This match has to succeed before the legitimate DNS query response arrives. Yes, Nozomi found that the DNS Transaction ID and the source port are easier to predict, but it still requires brute force.

DNS Poison only works for that DNS lookup (unless you catch an NS update). So you end up hammering over and over.

Back in the “Kaminsky Poison” many organizations turned on Netflow in front of their DNS Authoritative servers. They then set up alarms with there was a flood of ICMP Port Unreachable. A few organizations used this to detect unknown DNS Cache Poison attacks on DNS Resolvers in different parts of the world.

Most ISPs/CSPs have their CPEs set up to have them use DHCP configured DNS Resolvers. Granted, individuals can change the DNS settings on their CPEs, but that number will be small – limiting the risk’s surface area.

Ingress ACLs on the iACL

One of the key defense tools that many organization neglects is a simple router ACL (see illustration):

Control DNS Traffic Into and Out of Your Network

Policy Recommendation: Block DNS traffic from inside your network, allowing only approved DNS Resolver and DNS Authoritative servers. All over devices must use the official DNS Resolver(s) as their “DNS Forwarder.”

Our objective is to tighten the policies in your network to have your devices all use approved, monitored, and controlled DNS Resolvers. It makes it harder for the threat actors.

Having all your devices funnel through controlled DNS Resolvers allows you to turn your DNS Resolver into a security tool. It can then be used for DNS Poison resiliency along with SPAM, Malware, Phishing, and other security protections.

As pointed out, DNS Cache Poison attacks are nosy, generating close to a 1:1 ICMP Port Unreachable to the “source.” That “source” would be one or more of the name servers. This is “noise” is often referred to as “ICMP Backscatter.” There are a variety of tools to monitor ICMP Backscatter. The key is to monitor for when it happens, track down the DNS Resolvers under DNS Cache Poison attack, and investigate.

The key is to investigate. For example, one company used Netflow to alarm when there is a surge of ICMP Port Unreachable packets. That investigation uncovered an APT threat actor who was trying to get their version of software on hardware devices. While DNS Cache Poison attacks are not common, they do happen and usually are linked to craft threat-actors.

DNS Cache Poison works by having a “trigger” that kicks off a DNS Query. The Threat-Actor then has to flood the target with poison attempt to try to match the DNS Transaction ID and Source Port. The longer the DNS query RTT the long the threat-actor has to succeed. Reducing the RTT by deploying more DNS authoritative servers, using cloud DNS authoritative infrastructure, and DNS edge authoritative infrastructure all reduce the DNS query RTT. This RTT reduction help with the end-user experience while making it harder for DNS cache poising to succeed.

DNSSEC will resist DNS Cache Poison attacks. But, as seen in the illustration below, DNSSEC validation is required on the DNS Resolver to be effective against DNS Poison attacks. What this means is that DNSSEC is only effective if the DNS Resolvers turn on DNSSEC Validation. Remember, DNSSEC has a cost per zone. It requires operational time and effort to maintain. When organizations have thousands of zones, DNSSEC is a none trivial operational expense in organizations that traditionally neglect their critical DNS infrastructure.

Yes, DNSSEC is still expensive. The good news – any organization can track which DNS Resolvers asking for your zone information is DNSSEC validation. The DNSSEC Flag is set to D when a query from a DNS Resolver is sent to a zone’s authoritative servers. A script in the logs can match the number of DNS Resolves to the “DNSSEC Request.” A high percentage will illustrate the return on investment for the additional operational DNSSEC costs. Additionally, if you compute the DNS Resolvers using DNSSEC to a per zone analysis, you come up with a cost-risk-benefit analysis to see if DNSSEC is worth the cost for each zone.

Authoritative DNS Infrastructure can make DNS Cache Poisoning harder with multiple nameservers. Today’s DNS Resolvers USE all the nameservers. Different DNS Resolver software has techniques to find the fastest DNS Resolver(s), use those, then periodically “heartbeat check” to see if there is a change.

Nozomi Networks and the library maintainer are to be commended for transparent responsible disclosure. They asked for ICS-ISAC’s help, then rotated over to CERT-CC to get help. Yes, we have an industry exposure to this vulnerability. But, we also have workarounds that add DNS Cache Poison detection and resiliency.

Alias, all is not well until all the devices are updated to resist DNS cache poisoning. Given this, have a conversation with your vendors. Ask them how they are testing to resist DNS Cache Poison attacks.

The Action CheckList to help you minimize the risk of DNS Cache Poisoning:

Are you looking for more practical, low-cost security Advice?

The materials and guides posted on www.senki.org here are designed to help organizations leverage the talent around them to get started with their security activities. Start with the Operator’s Security Toolkit and Meaningful Security Conversations with your Vendors. Each is no-nonsense security for all Operators. It provides details to help them build more security resilient networks. In the meantime, stay connected to the Senki Community to get updates on new empowerment and security insights.